Short itinerary to discover the historic bakery of Piròn in Bologna

Historic shops in Bologna: Piròn is certainly the reference baker for over fifty years. Its history through the itinerary in the historic center. 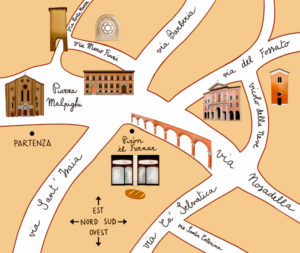 “This booklet offers a brief historical-touristic itinerary to help you get to know a specific area of Bologna in which the historic bakery Piròn el Furnàr of Angela Bai and Family is situated.”

We will walk along the streets of the center in the area of Via Malpighi. A historical research of all respect to explain the meaning of each place. There are also anecdotes and the audio insert, with a little song in Bolognese dialect sung and performed by Fabio Fioresi.

A project of the city of Bologna

The Municipality of Bologna has financed this work on the city’s shops. The supreme is to have it available in various formats. The tourist can choose between e-book, paper book and audiobook.

The task was entrusted to Valeria Riguzzi, with twenty years experience as an editor. Riguzzi also worked closely with Angela Bai, daughter of Piròn and current owner of the bakery.
The map is designed by Alessandra Pivato.

The voice of the audiobook is by Monica Salvi

the book is also found at the following bookshops in Bologna:
Parolini in via De Gombruti
Trame in Old town
Ubik in via Irnerio, near the University

The e-book in Italian